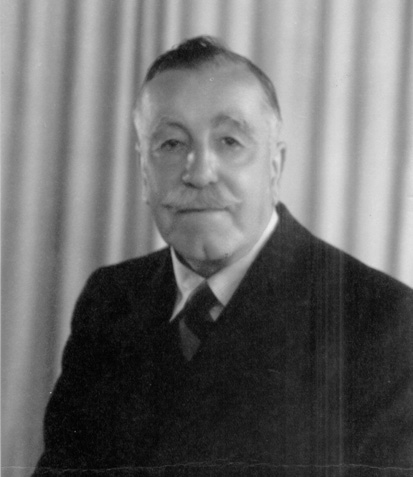 Bill, as he wished to be known without D’Avila mentioned, was a Carlton Jeweller and Pawnbroker and a partner in Melbourne’s first Mont De Piet, retired to Paynesville during the 1930’s. Married to Elsie Emily Ladd they left their business affairs to son William Avila Tilley, father of my friend Vern and the lady who gave Hughie Walpole the photo of our first Life Member and retired to “Lynton”, purchased off Jack Thomson.

When Jo Underwood asked me to write a story on Bill I contacted Vern to help me with some of his memories. Vern, now 78 years, couldn’t recall much apart from great holidays at “Lynton” and going for a sail in “Alvina”.

When Bill first arrived he had to have a sailing boat. He made friends with Robert Simpson – Michael and Roger’s grandfather and the man who named our Club who introduced him to Osmond Day, a local shipwright and builder of lake fishing boats. OZ, as he was known, used the moulds of his seine boat and added another plank to the topsides to create “Alvina”, a nice little gaffer eighteen feet in length and with generous beam. Robert was racing skipper for Bill at Regattas before the Club was formed.

The formation of the Club took place on the 19th January, 1937 at a meeting convened for that purpose by John Kingswell Lloyd at the Soldiers Memorial Hall, Bairnsdale. Bill Tilley wanted to be part of it and promptly offered a one hundred pound loan, interest free, to construct a Clubhouse with his favoured site being the one chosen. Situated fronting Sunset Cove on the present swimming area site – all the land to the east with Marion and Rick Hills home and Julia and Marshall Walkers property was part of “Lynton” subdivided by the next owners Bob and Bessie James. Lands Department and Ports and Harbours approved a site for the slipway to be constructed into the Club.

Prior to commencement, written approval for construction and site was requested from Bill and Elsie. The successful tenderers were Paynesville shipwrights Charles Clifford Niell and Osmond DeCourcy Day, the sum of thirty pounds being accepted for construction. Materials were supplied by J. K. Lloyd for the amount of fifty seven pounds five shillings and threepence. A crab winch was also purchased at this time to be placed at the head of the slipway for cradle recovery. Bills one hundred pounds had gone a long way to getting the Club established.

At this time a jetty site, adjacent to the northern fence of Gippsland Ports Shipyard, had been approved and it was resolved that this be retained for motor boat owners. We had an ‘L’ shaped jetty there for many years. Bill rarely attended a Club meeting prior to his Life Membership, but was a staunch supporter. He also donated a megaphone for Club use, late in 1938, prompting a letter of appreciation to be forwarded thanking him for the megaphone and his interest in the Club. At the Annual Meeting, October 12th, 1938 it was moved, seconded and carried that Bill Tilley be appointed a Life Member of the Club.

Opening Day at the new Clubhouse was set down for December 3rd, 1938 at 3p.m. The Hon. A. E. Lind, Minister for Lands was invited to open our new Yacht Club headquarters and declare the season open. A dance in the Paynesville Mechanics Hall was to follow that evening. The only unhappy person was Elsie – on completion of the Club she took a dislike to looking at it down there in the bay below “Lynton”, telling Bill he’d have to get rid of it.

The first fifteen pounds of Bill’s loan was repaid on November 21st, 1939 with an additional ten pounds being repaid on May 28th, 1940 with a suitable letter of thanks. After this meeting the Club went into recess during the war years until a meeting on March, 17th 1945 seeing it become active again. It was also at this meeting a motion was carried that Debentures of one pound value be issued for the purpose of liquidating the outstanding liabilities of the Club. Also at this meeting Elsie’s point of Bill having to get rid of the shed down there was raised. The motion was “it remain in its present situation until a more suitable site be obtained”. The amendment from Bill and seconded by his race skipper Robert “that it be removed from its present site” was defeated. The June 19th, 1945 Committee meeting held at Paynesville resulted in a motion being carried that Bill’s remaining seventy five pounds be paid in full. Bill passed away on 9th September that year.

Elsie’s wish came to fruition at the end of the 1947-48 season when a crew, led by Charlie Drummond, removed the shed. Removal was not going to be easy with only two ways to get the materials out. Hand lump it all up the steep hill or clear a road through the heavy ti-tree and gum trees along the lake shore – the latter being the chosen way. Working bees went on for several weekends removing scrub from both ends to get the truck in. The western crews wouldn’t see the eastern ones for some weeks. Eddie Williams, the founder of the Raymond Island race, damaged his gear box three times snigging out trees. Eventually the way through was clear, the shed materials transported to Bairnsdale, where Charlie and his crew of willing members enlarged the shed prior to placement at its present site. All this clearing was done without permit or complaint. It was relocated to Paynesville and erected, mostly finished in one week and was opened by Cr. A. J. Gilsenan on the 3rd December, 1949.

The original Opening Day ceremony, which was to be carried out by Hon. A. E. Lind, was eventually carried out by Mrs. Annet Thomson, wife of first President Ralph Sinclair cutting the ribbon stretched across the doorway.

My first memory of Bill and Elsie goes back to a Garden Party they held on Melbourne Cup Day 1940 with most of the village present. They loved to make people happy and it certainly was a happy day for my mother and father, Bessie and Sam. Bill conducted a sweep on the Cup and when Dad drew ‘Old Rowley’ he also had two shillings each way with the SP bookmaker that was present. When ‘Old Rowley”, a seven year old chestnut gelding trained by J. A. Scully, ridden by A. Knox, wearing his orange colours with a white sash and black cup, starting from barrier five with number eleven saddle cloth and carrying seven stone, twelve pounds on his back won the Melbourne Cup, starting at the generous odds of 100:1, being only one of three horses in the history of the race to do so, my mother and father were over the moon. Apart from that day I can’t remember much of Bill at all – more of ‘Old Rowley’.

Since 1950 our Club has been the most popular venue in the nation if you can believe all who have attended National and State titles in both yachting and power boat racing, until the breakaway.

Our Xmas, New Year titles and Easter Regattas have attracted hundreds, and possibly thousands, to relocate through the years to Gippsland Lakes. Our members have made it all happen through all those years with their dedicated approach to the welfare of our Club. Business houses through the town have realised how much revenue we bring in and some have given us generous support in recent years. In the old days it was nothing for 600 crews and families to book the place out from year to year. We’ve always had a small percentage of knockers and they still exist.

In talking to Vern early about his Grandfather I asked him “who Mrs. Burrows was, that dropped the photo of our first Life Member, into Hughie?”. Vern’s response – “That’s my 79 year old sister Joan, she must still be tripping about in that campervan of hers”. Vern was a well known boatie on the Lakes with his 40′ cabin cruiser “Dunkeld” formerly “Mariposa” for many years berthed at the slipyard. Thanks Vern and also thank you to Past Officer, Bryan James of Bairnsdale who became owner of “Alvina” when his parents took over “Lynton”. Bryan and the rest of us who took part will never forget that westerly gale we took on with a fully reefed “Alvina” and nearly half a football team to keep her afloat and going. She fairly flew that day in weather none of us had experienced before. A lesson was learnt by all that day – commit yourself and you will succeed if you work hard enough. Bryan later sold “Alvina” to Roy Glenn and his sons Bob and Peter sailed her for some time in the Club. She left here for Marlo and disappeared, probably making someone a lovely little motor boat.

Bill Tilley, well done, you made life easier for the Club in getting it underway and are a worthy recipient of the honour that was bestowed upon you. 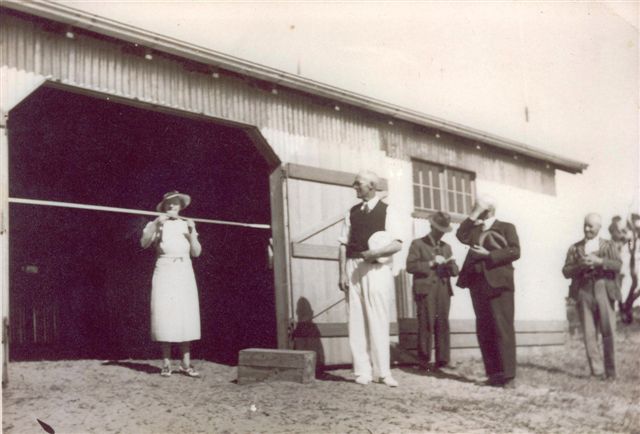 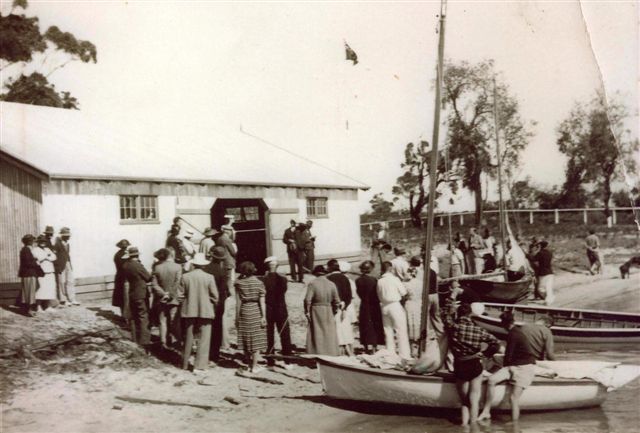 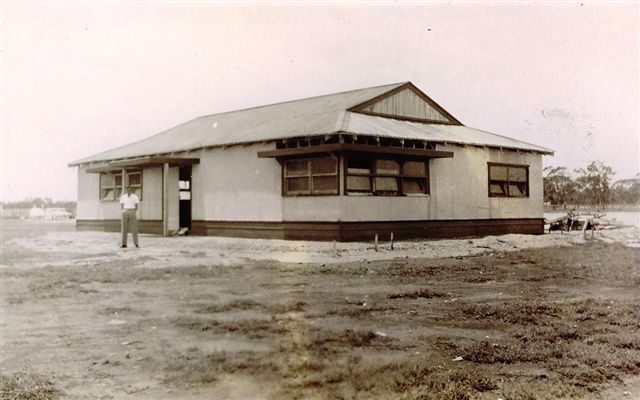 The clubhouse at it’s new location 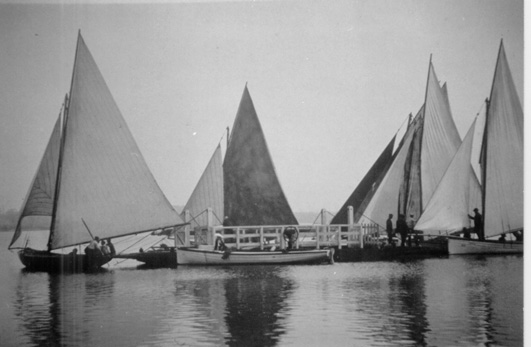 A race start from the Raymond Island punt. The fishing boat moored to the jetty was the “Resolute” owned by Nicholas Walsh, which was the first commercial fishing vessel to be powered by an engine.